October had to be one of the most beautiful months I've ever seen in here in the Pacific Northwest. I read that we are having this amazing abundance of fall color because of our moist growing season followed by a dry autumn period combined with sunny days and cooler frostless nights. The oranges, yellows and reds and dark burgundy's are just stunning everywhere you look. These magnificent cottage style adirondack chairs look so adorable in front of the colors of the Snowball Shrubs that create a hedge on the side of our driveway. 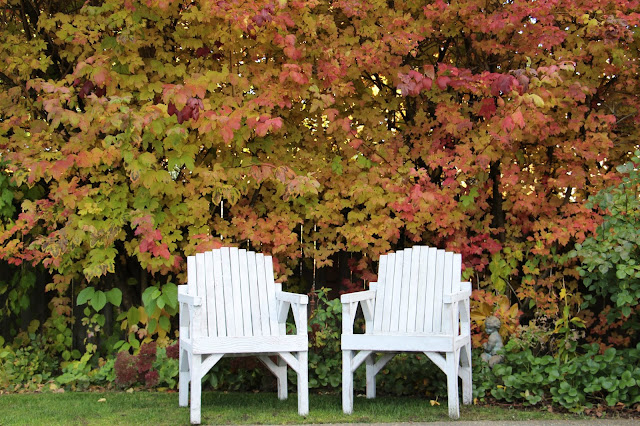 The front garden path lining with rose trees and peonies lining the boarders is gorgeous… I've been  busy with beginnings of cutting back all the peonies, columbine, hostas and trimming of shrubs and trees. 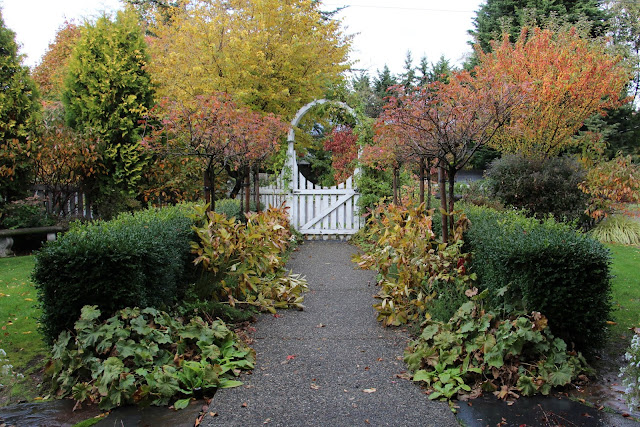 The Snowbell tree that once began in the landscape as a 12 inch seedling has grown into a magnificent staple in the front yard that is beautiful all throughout the year. I had four others placed sporatically in the landscape, however I removed all but this one because of the absolute mess they make and the pods that drop and create hundreds of new trees. This one though somehow has stayed as one of my favorites. 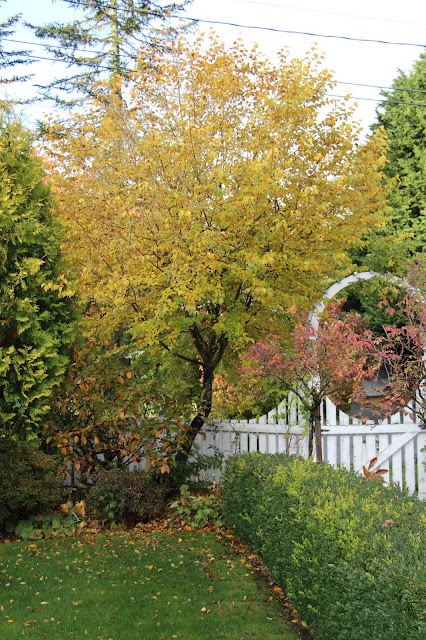 The Vanilla Strawberry Hydrangeas remain a beautiful aspect in the front garden, even in the fall. You can see the yellow hue that the leaves are turning while several of the leaves have already dropped. The three Thuja Occidentalis Yellow Ribbon have grown so large since planting them in 2010. They have really crowded this area and I'm contemplating removing them - I do cringe at the idea, but there are many plants that have been lost and buried because of the overgrowth. You can see in the second photo below just how large they have become - it would open a whole new world of ideas for me in this space. 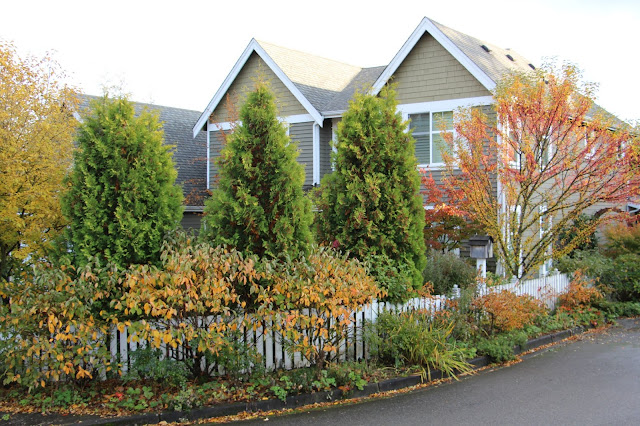 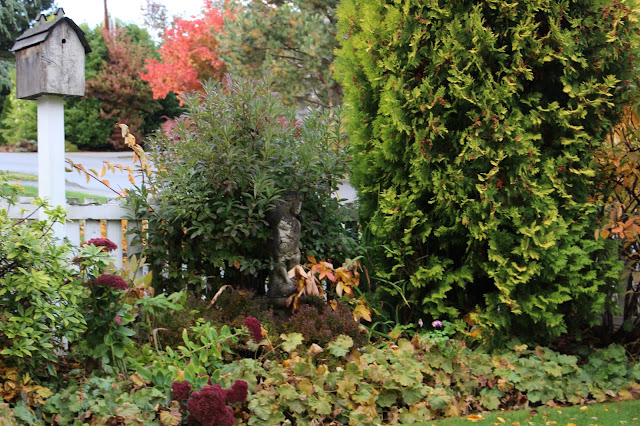 I recently realized the pole of the bird feeder that was in this space was rotting out and needed to be replaced...I generally never put food out in it because of the rat problem we have with a greenbelt across the street.  So it really was just for looks, and I really do like how it looked in this space. Ironically I found a new birdhouse that I think might look just as dreamy here in this spot, but need to find a pole and figure out how to place in the space without having it rot - I will show you once its completed.  I think having a birdhouse here will get much more use than the feeder anyway. The tree to the right of the birdbath is also a favorite of mine. Right now it has bright red berries(second photo down) that the birds love to feast on...its definitely a beauty for all seasons. 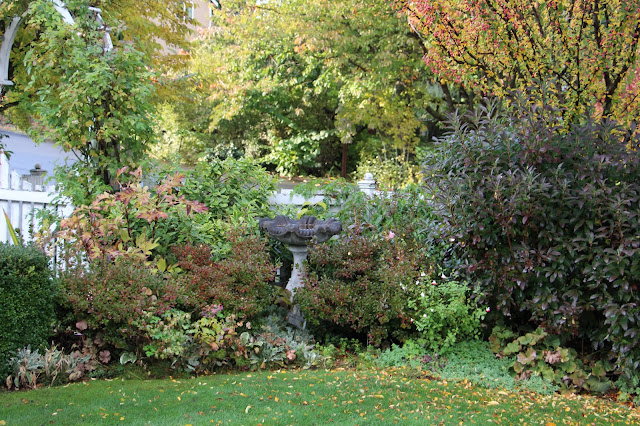 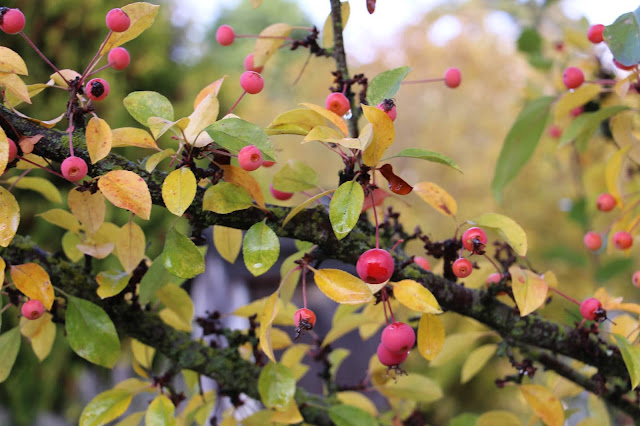 Most of the hostas I wait until we have had a few frosty nights to remove. I used to cut them all back individually but the repetitive motion of cutting is truly hard on my fingers and wrist and I've learned that if I just wait for the frost to work its magic in the garden, the hostas simply melt into a big goopy pile and I just have to lift them up off the ground and toss. Besides leaving the hostas as long as possible give me extra fall color that you wouldn't expect at the base of the flower beds. 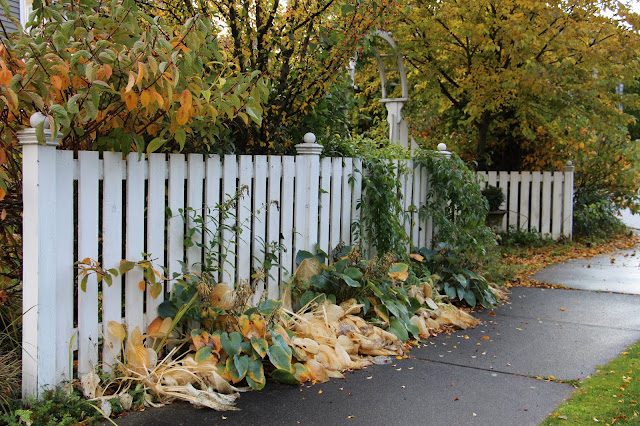 I purchased several garden pieces in October...although this one isn't new, I appreciate seeing birdbaths and other cement structures under the trees and shrubs as the foliage turn color and the leaves begin to drop. Birdbaths give the birds a place to stop and bathe and have a sip of water during this really cold yet dry time here in the PNW. 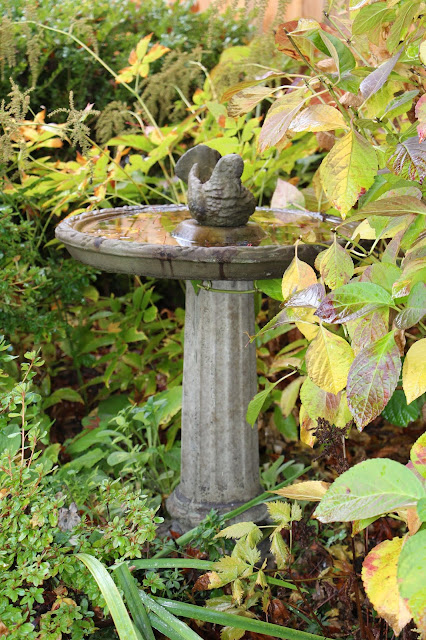 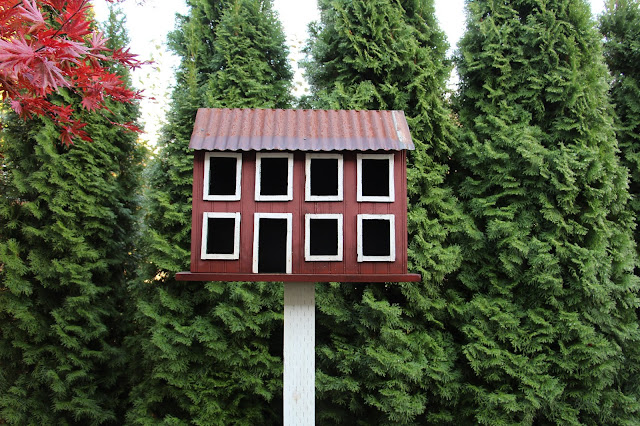 The Chicken Church looks incredible right now. I love love love the view from all the windows inside our home that face this space. And when we are sitting on the patio, its just stunning as well. It looks as though it has been here for as long as the garden has been evolving. There are so many pretty yellow colors that yellow has been my color of choice decorating for fall. 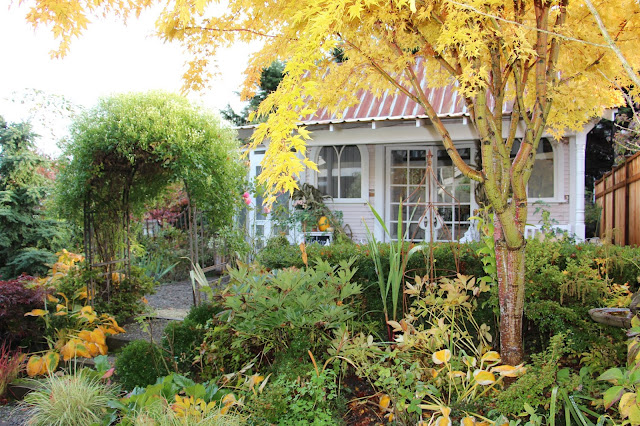 The backyard is showing off some of the best colors I've ever seen before. The hostas on the edges boarding the grass and the trees and shrubs are a mix of both deciduous and evergreen plantings. There are arborvitae, locust, maple, dogwood, hinoke, alberta spruce, azalea, camellia, lilac and so many others that aren't coming to mind right now. The variety of colors and textures are truly magnificent combined. 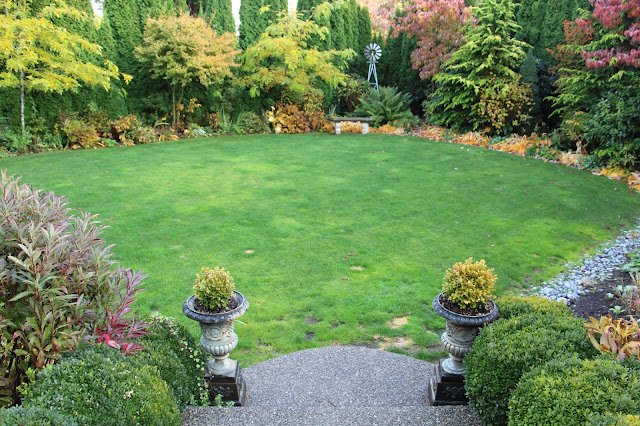 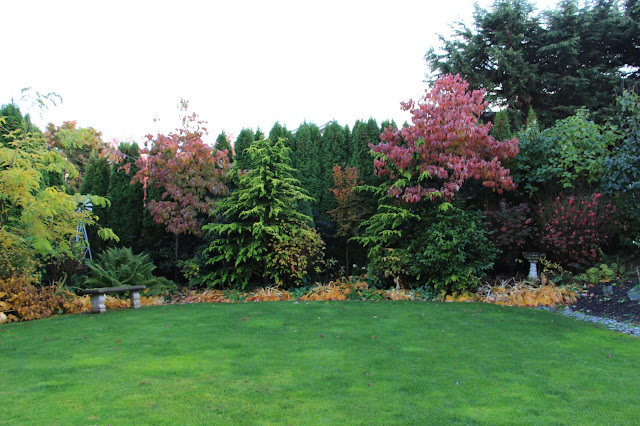 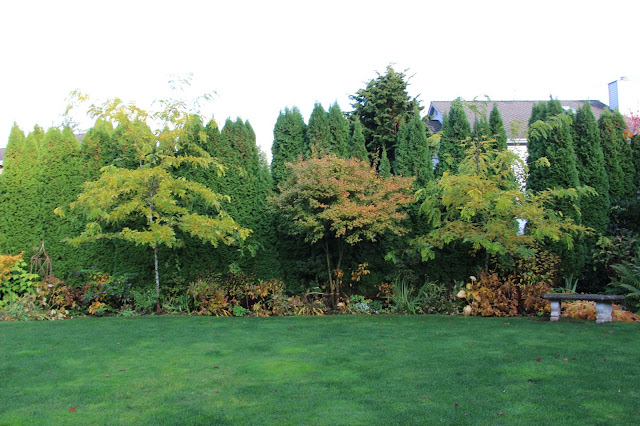 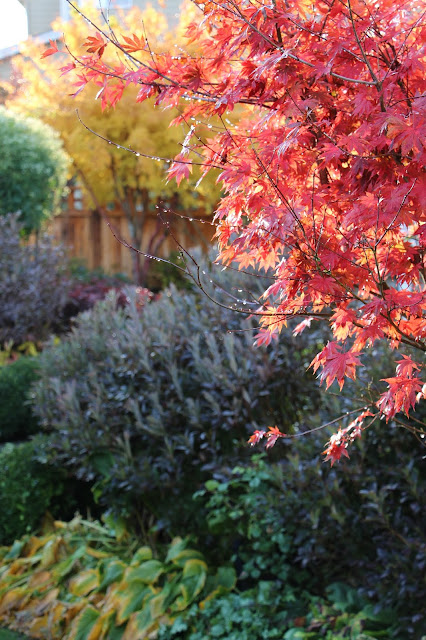 I've already cut back all of my roses (several weeks ago) to keep them from falling over during the winter months, but I still have a few new blooms that have appeared since doing so. I wont touch them again until next May after all threats of snow and cold temperatures disappear. Both Teasing Georgia and Koko Loko are still putting on a show that makes them extra special right now. 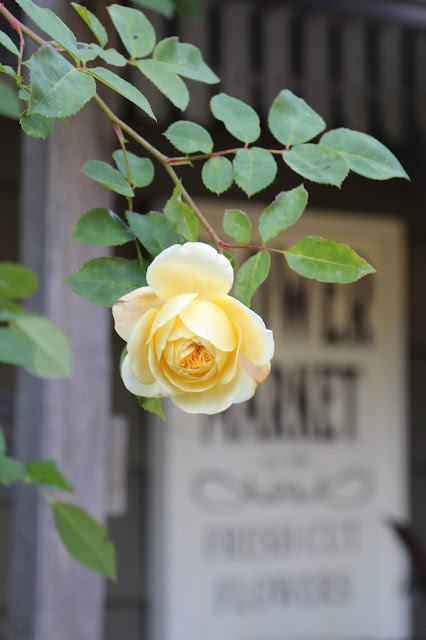 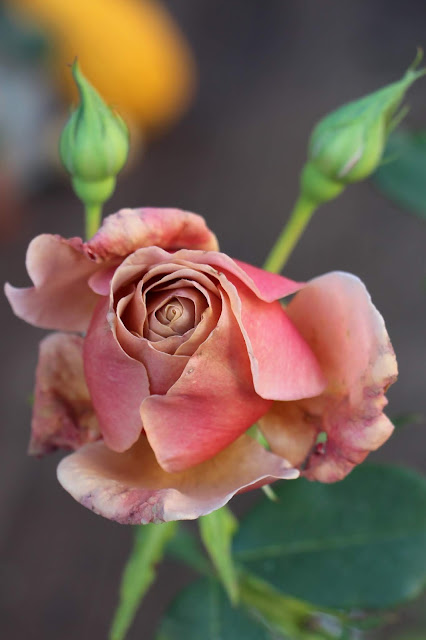 Oh, and I must show you my sweet little flock of Silkie Chickens.  They love free roaming but now that the temperatures are changing and they don't have as much to hide under they are only out to forage when I can be out there with them. I currently have a darling flock of pastel colors and a few babies that I hatched over summer that I am growing out in hopes of a few more hens. 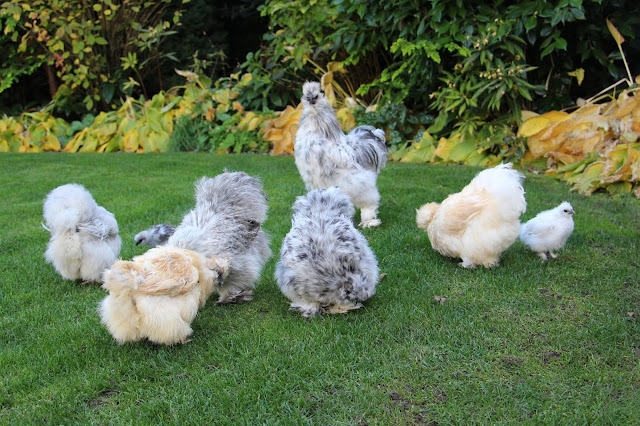 Thanks for coming over today and taking a peek of what October looked like for us. Make sure you are following Instagram - I love sharing there and if you watch my stories I am  sharing lots of what I am personally doing in the landscape. xoxo, tracie

Natureluvr57 said…
Love those chickens and your garden areas. I just leave my Hostas until Spring. Here in the Midwest we had about 2 weeks of fall. The leaves hardly fell and we had snow and a freeze without any frost. I usually wait until a couple frosts to dig up my Cannas but I had to go out in the muddy mess when it warmed up in the 40's to cut them down and dig them up. I never remember not having a frost several times before freezing weather. I kept thinking we'll have a warm spell since it's so early but nope. I just hope it didn't harm the bulbous roots I dug up. We have heated birdbaths which most people don't buy and put out. We get all the birds, squirrels, feral cats, skunks and who knows what else coming to drink in the winter when the water is frozen solid. It was 45 degrees today so I finally got to rake. I have 5 garbage totes full of leaves but I like to gather them and shred them with the leaf blower so more will fit into the totes. I use them in my compost/garden. Enjoy your Fall while you can.
November 16, 2019 at 11:22 AM

Marlene Stephenson said…
I know how much work is involved in this beautiful scenery, but it is so very amazing and enjoyable, thank you for all these pictures you have shared.
November 17, 2019 at 2:08 PM 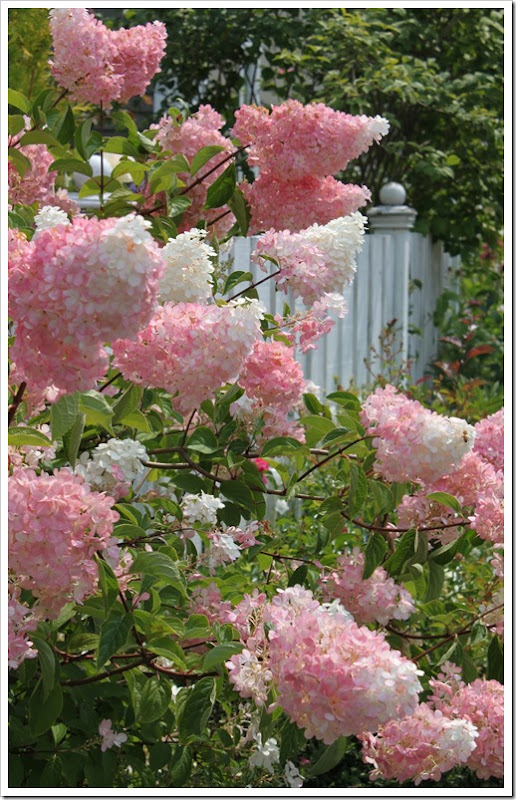 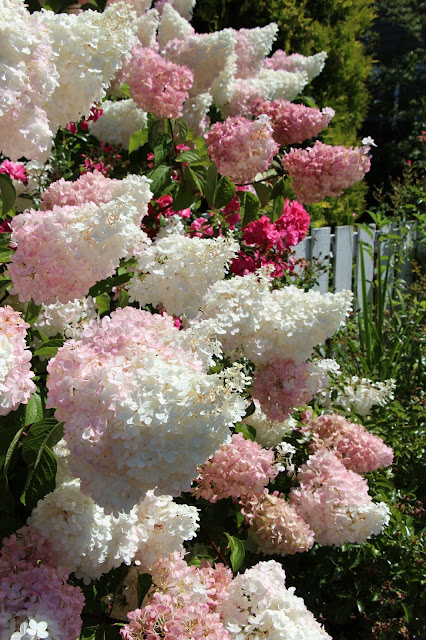 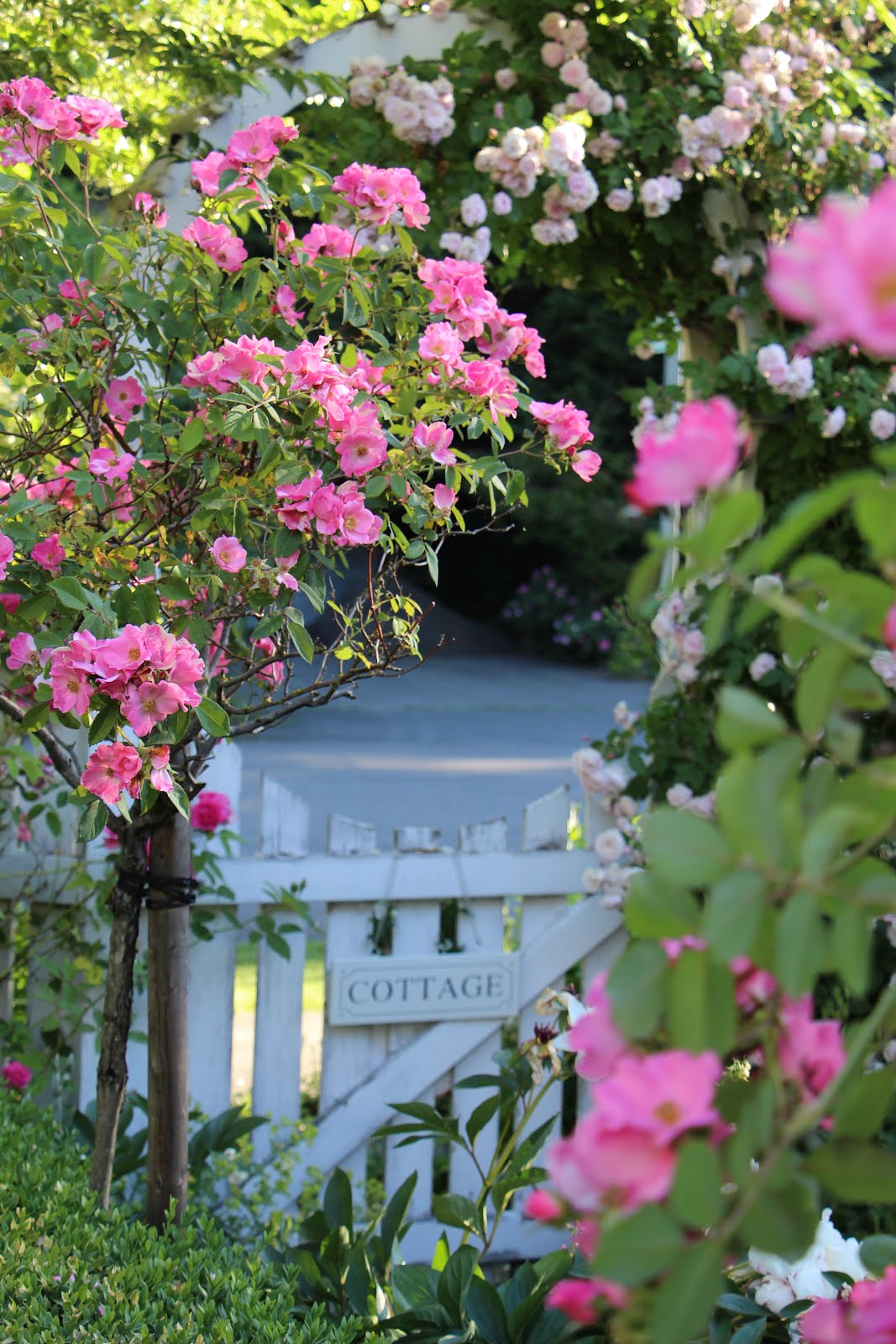 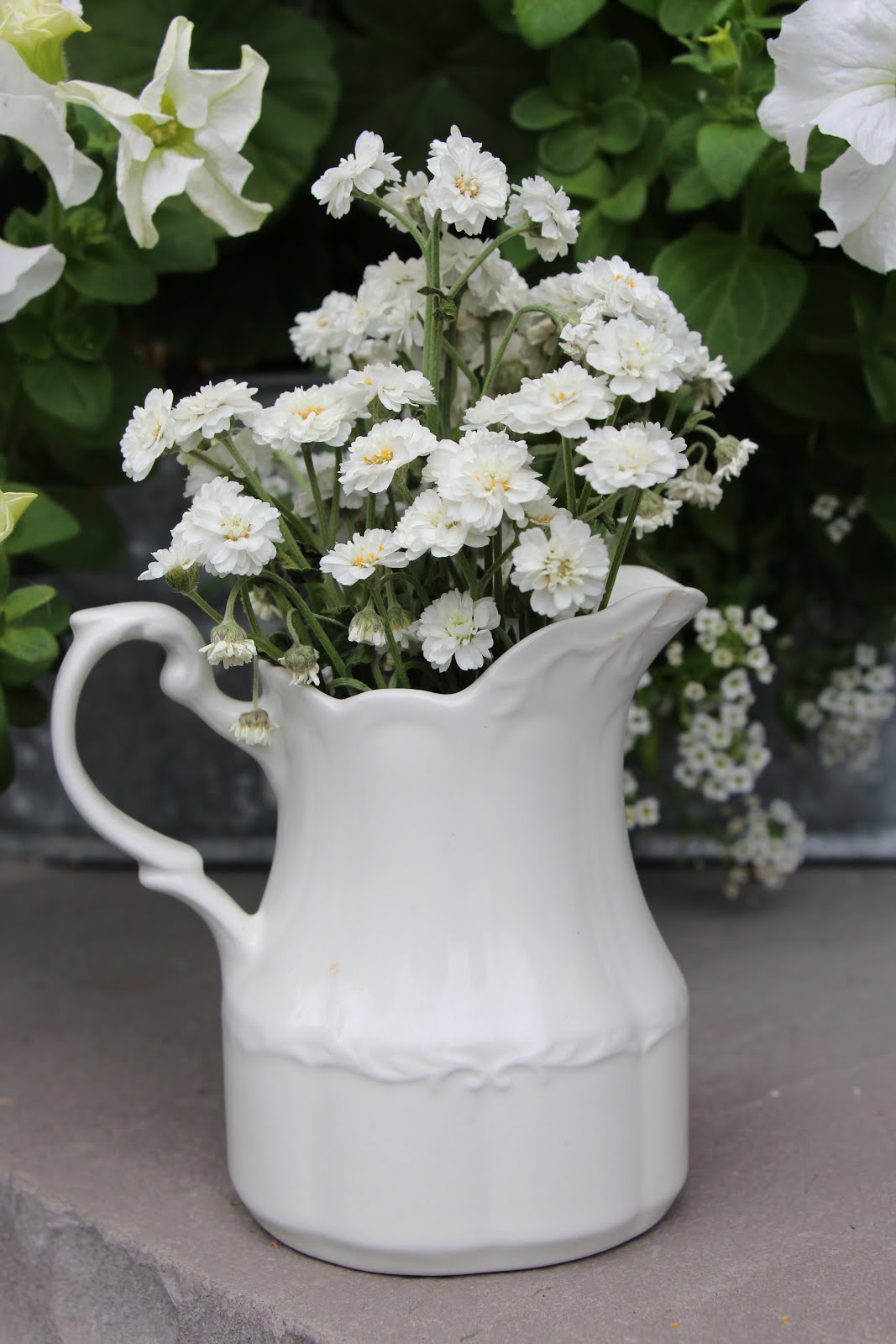 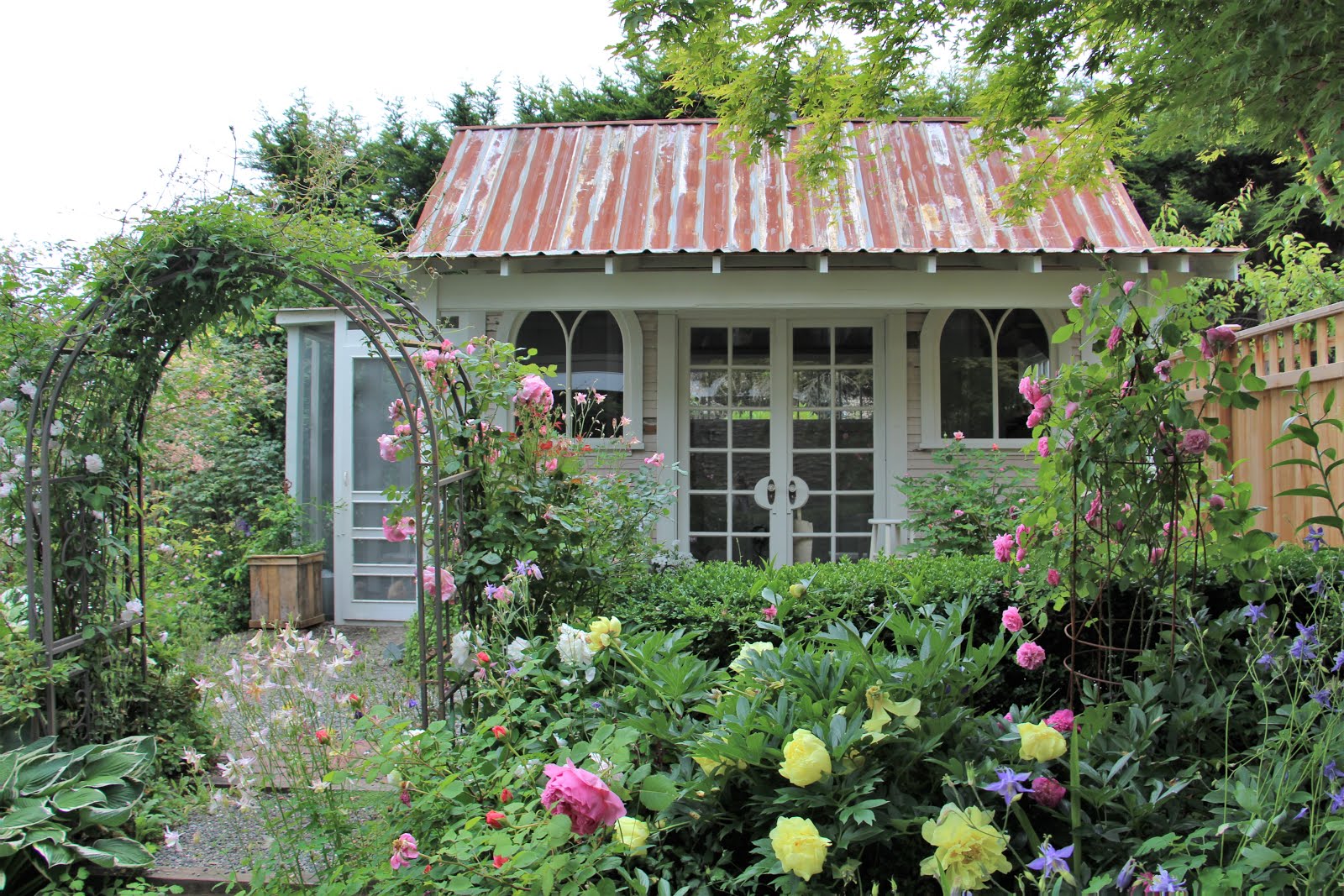